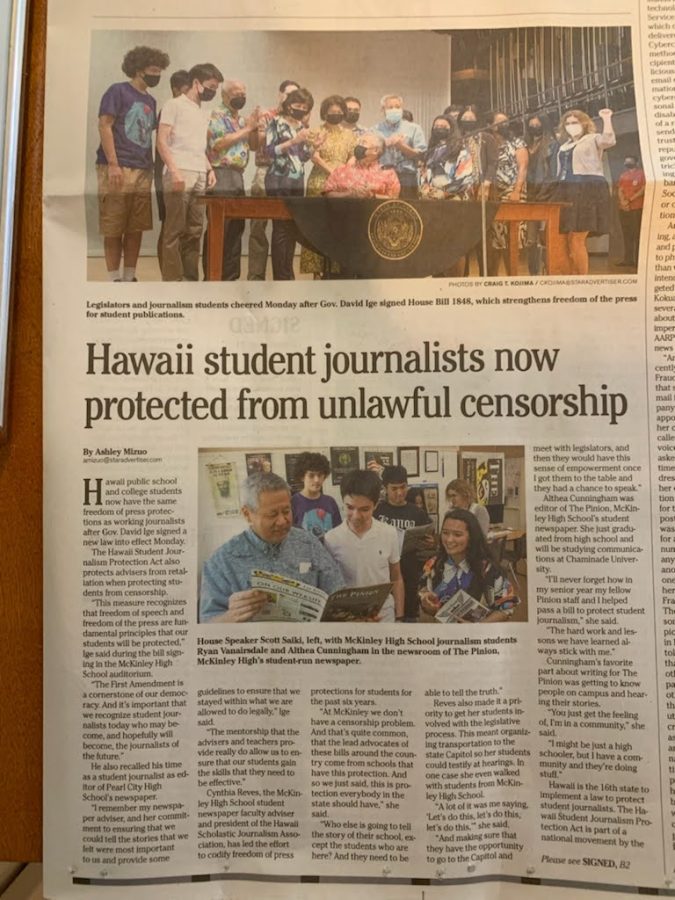 On Monday, May 23, 2022, Gov. Ige signed the Hawaii Student Journalism Protection Act into law. It was the end of a six-year journey by scholastic journalism advocates in Hawaii. The first two years were spent advocating to the board of education to change Policy 101-9 School-Sponsored Student Publications and, when this advocacy failed, learning how to create a bill. A bill has two years to become law or it must be reintroduced. Two bills were introduced in 2019. One never got a hearing and the other died in its final committee in 2020. The reason given was the pandemic caused priorities to shift. Both bills were introduced again in 2021, with added protection for post-secondary scholastic journalism. Neither got a hearing that session. In 2022, the house bill, sponsored by Rep. Takashi Ohno, did not get a hearing and the senate bill, sponsored by Sen. Les Ihara, died because its second committee failed to hear it. However, Rep. Scott Saiki introduced a new bill with the same language and that bill moved through two house committees and two senate committees and governor approval. The details of this journey can be found here. You can also see the journey as recorded in real time on HSJA’s Facebook page.

The bill signing was the first in-person signing since the Covid pandemic began. It was held in the auditorium at McKinley High School. Speakers were Gov. Ige, Rep. Saiki, Sen. Rhoads, and student journalist Althea Cunningham.

Below are pictures and articles about the signing.

Ige told lawmakers and students gathered for a bill signing ceremony at McKinley High School that he was the page one editor of The Messenger at Pearl City High School.

“Providing student journalists with the same protections that exist for them in the industry gives them real-world opportunities and provides them a more enhanced laboratory for democracy and learning,” Ige said.

Althea Cunningham, a recent McKinley graduate and student reporter at The Pinion, submitted written testimony saying students should be able to chase and report the truth with confidence.

“Schools are supposed to help prepare students for the future. How is letting administrators get away with killing articles they don’t agree with helping our future journalists?” she said. 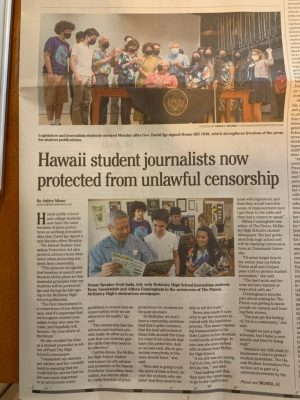 “This measure recognizes that freedom of speech and freedom of the press are fundamental principles that our students will be protected,” Ige said during the bill signing in the McKinley High School auditorium.

“The First Amendment is a cornerstone of our democracy. And it’s important that we recognize student journalists today who may become, and hopefully will become, the journalists of the future.”

He also recalled his time as a student journalist as editor of Pearl City High School’s newspaper.

“I remember my newspaper adviser, and her commitment to ensuring that we could tell the stories that we felt were most important to us and provide some guidelines to ensure that we stayed within what we are allowed to do legally,” Ige said.

“The mentorship that the advisers and teachers provide really do allow us to ensure that our students gain the skills that they need to be effective.”

Cynthia Reves, the McKinley High School student newspaper faculty adviser and president of the Hawaii Scholastic Journalism Association, has led the effort to codify freedom of press protections for students for the past six years.

“At McKinley we don’t have a censorship problem. And that’s quite common, that the lead advocates of these bills around the country come from schools that have this protection. And so we just said, this is protection everybody in the state should have,” she said

“Who else is going to tell the story of their school, except the students who are here? And they need to be able to tell the truth.”

Reves also made it a priority to get her students involved with the legislative process. This meant organizing transportation to the state Capitol so her students could testify at hearings. In one case she even walked with students from McKinley High School.

Althea Cunningham was editor of The Pinion, McKinley High School’s student newspaper. She just graduated from high school and will be studying communications at Chaminade University.

“I’ll never forget how in my senior year my fellow Pinion staff and I helped pass a bill to protect student journalism,” she said. “The hard work and lessons we have learned always stick with me.”

Cunningham’s favorite part about writing for The Pinion was getting to know people on campus and hearing their stories.

“You just get the feeling of, I’m in a community,” she said.

“I might be just a high schooler, but I have a community and they’re doing stuff.”

Hawaii is the 16th state to implement a law to protect student journalists. The Hawaii Student Journalism Protection Act is part of a national movement by the Student Press Law Center called “New Voices” laws. It aims to remedy the impact of a U.S. Supreme Court case, Hazelwood School District v. Kuhlmeier, which set an unclear standard when it comes to censoring student journalism when produced through a school. The Student Press Law Center said the Supreme Court decision has allowed students across the country to be censored for “virtually any reason.”

“At a time when content-based restrictions on education are being legislated around the country, Hawaii has instead adopted a law which values student voices, encourages discussion and debate of civic issues, and recognizes the important contributions of a free student press,” said Student Press Law Center Executive Director Hadar Harris.

“We are thrilled that Hawaii has become the 16th state to restore full First Amendment protections to student journalists through a New Voices law.”